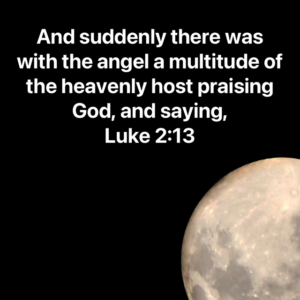 On the night that Jesus was born, an angel announced the good news to the shepherds in the fields. Appearing with the angel was a group of Heavenly Host.  When the Host appeared, the sight of them made the shepherds afraid because they had never seen anything like them before.

So who are the Heavenly Host?  They are and angelic tribe who work on behalf of Heaven and help on the earth.  One third are under the Archangel Gabriel, and they are the angelic.  One third was under Lucifer and when he fell, they fell with him.  And one third are under Micheal and they are called the Host.  They are the army of Heaven.  Psalms 148:2 says, Praise Him, all his angels; praise him, all his heavenly hosts.

The Heavenly Host see every act of the enemy and they only come to fight.  They are of the warring group.  They remove demonic strongholds and demonic platforms.  Platforms are regions that the enemy has, and they are able to see from them in the spirit realm.  The more sin there is in a region the more power that the enemy has to build platforms to rule over areas.

So what do the Heavenly Host do for you?  You are their commander.  They can not do anything until y0u command them to move.  You where made to command this army.  God says command ye me; which means to show Him you can command.  We are His joint-heirs, so as He commands the Host of Heaven, we too can command the heavenly host.  You rule and reign in this world.  The army of Heaven has not been given power over all the power of the enemy.  You were given the power over the enemy.  The Host were designed to fight the enemy, but you have to take power and authority over the darkness to send them.

You are kings and priest on the earth and you have all power and authority over the enemy.  Luke 10:19 says, behold, I have given you authority to tread on serpents and scorpions, and over all the power of the enemy, and nothing will injure you.  You are the army on earth and the army of Heaven works with you.

You start with 100 Heavenly Host to command, and they wait for your command, over your home in the sky.  The more that you send the bigger your army gets.  They are waiting for you to send them and if you do not assign them, then they will leave.  They will fulfill their assignment immediately, it does not take them long to fulfill their assignment.  If you say how can that be, then look at Matthew 26:52.  It says, Do you not know that I can ask My Father, and He will at once put at my disposal more then twelve legions of angels.  Disposal means the power or authority to make use of as one chooses.  So If Jesus could ask His Father to send down warrior angels to make use of them as He chooses, then we as His joint-heir, can ask the Father to send down warrior angels.

God made the army, so you can command.  You take authority over the enemy first then you send the Host to fulfill what you tell them to do and for how long.  You must speak your command out loud, the army wants to hear you say it.  Your tongue is a powerful weapon and commanding the army is powerful.

So how do you command the army?  First make a list of the general things and send them to pull down strongholds, crush the darkness and pull back the enemy.  You can do this over things in your life or for places like the area you live.  You can also do this for the nation.  For example send them before your trips to do traffic control.  Tell them to pull down the demonic platforms and break off demonic strongholds, so that there will be no hold ups, accidents, delays or breakdowns.  You must be specific on how long you want them to go too.  So you would send them for the duration of your trip, send them in waves the whole time you are in your car.  Now you can do this for anything, and all day long.  They are waiting on you for their orders.

In order to command your Hosts, there can be no sin in your life.  You must be living in righteousness in order to command your Host.  If you are not living righteous they will return to Heaven.  So whatever is in your soul will be what comes out of your mouth.  Watch that you do not complain a lot because it will hold back the blessings that He has for you.  Your soul must prosper before you can command the army.

Remember that 2 Corinthians 10:4 says that, for the weapons of our warfare are not of the flesh, but divinely powerful for the destruction of fortresses.  Also Ephesians 6:12 says, For we wrestle not against flesh and blood, but against principalities, against powers, against the rulers of the darkness of this world, against spiritual wickedness in high places.  You have all power and authority to strip away the power of the enemy operating against you.  Get in the habit of sending your Heavenly Host each day.  Commanding the Host is not something you try, it is something you do.  Because you rule and reign on earth!

Get updates sent straight to your inbox.